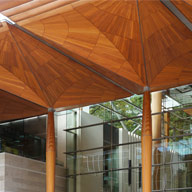 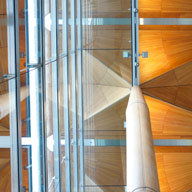 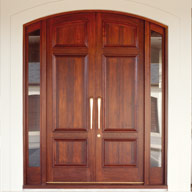 Kauri canopy at Auckland Art Gallery by Papakura Joinery from Commercial Design Trends volume 2715
Right from the outset, the architects of the Auckland Art Gallery were focused on providing a uniquely New Zealand design response, using local materials and services wherever possible.

The soaring kauri canopy is testament to both the design expertise of architects FJMT and Archimedia, and the fine craftsmanship of the company contracted to build the pods and columns – Papakura Joinery. 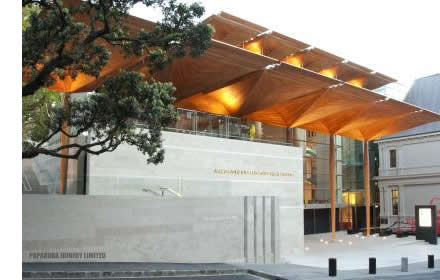 Director Glenn Haszard says Papakura Joinery was commissioned to construct 22 full pods, six half pods and 23 kauri columns up to 15m high – a complex task that involved in excess of 85,000 work hours.
"A prime requisite for the project was the need for a master level of timber joinery," Haszard says. "With minimal tolerances, both the planning and execution had to be near perfect."
Papakua Joinery project manager Jim Irvine says the bases were constructed like a house, with two sub-frames, including a laminated curved ply shape to which the kauri was affixed.
"The kauri board negative detailing needed to be accurate to within 0.1mm on interlocking corners. Rainwater gutters and fixings were concealed – the timber was joined with back screwing and gluing. And every effort was made to match the colour hues on individual panels to create a unified look."
Irvine says the curves dictated that every board had to be considered individually, manufactured then adjusted on its base with surgical precision.
Papakura Joinery also built the kauri seats in the gallery, which feature 13 layers of laminated kauri.

Superior craftsmanship and attention to detail have seen Papakura Joinery Limited through more than 55 years in business, completing thousands of high quality joinery projects throughout Auckland.

Papakura Joinery was formed in 1957 by David Burnside and is today owned by his grandson Glenn Haszard. The company flourished in the building booms of the 60s and 70s and through diversification and innovation is now at the forefront of an industry that demands excellence.
Haszard says he has seen a lot of competitors come and go over the years, while Papakura Joinery has stood the test of time and proven itself as a reliable provider of quality timber products.

Papakura Joinery's work is split into two divisions – joinery and timber mouldings.
The joinery division manufactures a full range of joinery products including timber doors and windows.
It's finely crafted entrance doors in timeless timber provide a focal point to the entrance of any building. Papakura Joinery has established a reputation for excellence and the ability to efficiently craft custom designs to exacting standards.
The company offers a wide range of timber interior doors and can customise doors to create a unique product for customers, with almost any moulding incorporated into construction.
Papakura Joinery manufactures large sliders and bi-folding doors, which are an ideal way to open up the interior of your house to the outdoors. Cavity sliders are a versatile alternative to hinged doors that can be manufactured in both contemporary and traditional styles. The slider system lends itself well to sensor controlled automatic open and close mechanisms.
The business strongly promotes and recommends CS For Doors for all your cavity slider needs and manufactures a full range of windows including casement, double hung, sliding and bi-folding.
In addition, the company can manufacture beautiful shutters to provide shade and privacy in any room. All shutters are made from Canadian Western Red Cedar, which has a proven record as the most stable timber available to avoid warping, twisting or bowing.
Its unique production process uses purpose-built machinery ensuring a perfect shutter every time.


Focus on quality and service

Papakura Joinery's talented staff operate a factory full of state-of-the-art machinery in order to make the best timber products, every time.
Haszard says the company owns high-tech machinery from throughout the world, particularly Germany. This quality machinery ensures all products are manufactured to the highest possible standards.
All products supplied by Papakura Joinery come with a five year guarantee, with great care taken to ensure good workmanship and materials that are free of defects. This emphasis on quality is a focus for the company's team of talented joiners.
Haszard says two of his joiners have won national awards for their joinery and then went on to represent New Zealand at international joinery competitions in both Canada and Japan.

A great company to deal with

Another reason for Papakura Joinery's success is the comfortable relaxed atmosphere created by Haszard and his staff.
"People who come in here, including our customers and suppliers, say it's a very friendly atmosphere. We all get along really well and respect each other," he says.
"Our workmanship and the banter the guys have with their customers is fantastic. We strive to get it right the first time. It often doesn't cost anymore to get the job right the first time, but it certainly costs everyone if it's not."

Papakura Joinery can give your house the perfect finish through its huge range of timber moulding profiles and capabilities.
The company began manufacturing timber mouldings in the late 1980s and has grown its machining operation into one of the largest in the country.
It operates three machines covering a range of machining options, from long runs of weatherboards, tongue-and-groove flooring and sarking through to skirtings, architraves, scotias and custom one-off profiles.
Modern high speed machinery is augmented by an in-house tool sharpening and knife manufacturing facility. An extensive inventory of knives is well maintained so that most profiles and shapes can be machined to tight deadlines.
The company is also a specialist in the manufacture of one-off profiles. It operates its own tool-making shop and can make its own metal profile to machine a set of cutting tools to create a unique profile.
If the mouldings are to be cut from hardwood, the cutting tools are machined out of tungsten carbide tool steel.
Haszard says Papakura Joinery mainly works on residential projects, including refurbishments, repairs, extensions and new homes. Many are high-end architectural homes requiring the best quality finish on all joinery and mouldings.
"Our guys do an excellent job," he says. "We're not the cheapest, but we're not the dearest either."

Papakura Joinery recently completed the new Auckland Art Gallery, a project which took two years and involved constructing intricate kauri pods, fascias, louvers and columns.
Haszard says the $5 million project was a major undertaking and saw Papakura Joinery double its staff to 50 and expand into additional premises. The project involved manufacturing 22 full kauri ceiling pods, six half pods and 23 kauri columns up to 15m high; a complex task that took more than 85,000 work hours.
"A prime requisite for the project was the need for a master level of timber joinery," Haszard says. "With minimal tolerances, both the planning and execution had to be near perfect."
Papakura Joinery project manager Jim Irvine says the bases were constructed like a house, with two sub-frames, including a laminated curved ply shape to which the kauri was affixed.
"The kauri board negative detailing needed to be accurate to within 0.1mm on interlocking corners. Rainwater gutters and fixings were concealed – the timber was joined with back screwing and gluing. And every effort was made to match the colour hues on individual panels to create a unified look," he says.
Irvine says the curves dictated that every board had to be considered individually, manufactured and then adjusted on its base with surgical precision. Papakura Joinery also built the kauri seats in the gallery, which feature 13 layers of laminated kauri.

This commitment to excellence resulted in a spectacular end product.
Archimedia senior associate Russell Pinel says, "The ceilings of the Art Gallery will amaze and delight scores of gallery visitors for decades, because they have been so skilfully and expertly constructed by a very competent team of craftsmen that work for Papakura Joinery."
Hawkins Construction project manager Grant Thomas says Papakura Joinery assisted with innovative ideas through all stages of construction. "The quality and workmanship of the kauri pods, fascias, louvers and columns is second to none and a tribute to the team involved," Thomas says.
"Papakura Joinery were able to successfully deliver the required components to site, working to the main contractor's programme."
"Jim Irvine and the construction team are to be commended for their attention to detail and standard of workmanship that was second to none on what has to be considered one of the most complex joinery projects completed in recent times."

Craftsmen of the south

IT'S COMMON knowledge that the redeveloped Auckland Art Gallery will be one of the inner city's most spectacular structures once completed.
What many people don't know is that some of its most significant features are all down to expert south Auckland craftsmen.

Hawkins Construction project superintendent and heritage manager Mike Farrelly says southern business input is integral to the $121 million redevelopment.
It's responsible for some of the most intricate features of the refurbished building – from the complex plastering to the grand kauri ceilings.
Mr Farrelly is a proud Papakura man and says the local firms have nailed the job with precision.
"A lot of the more intricate work has been done by south Auckland companies. They've done a magnificent job and deserve to be acknowledged." 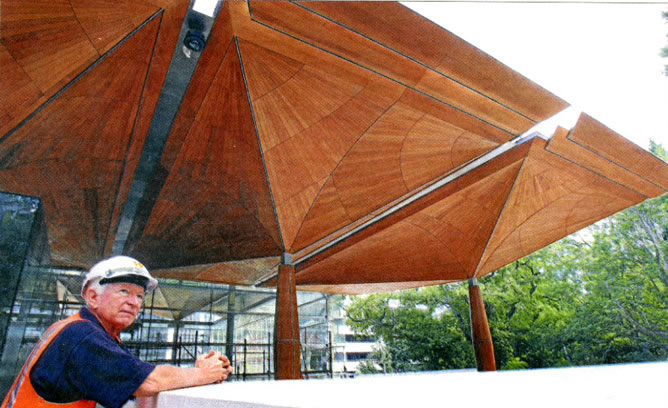 The giant kauri pods of the gallery's roof were created in the workshops of Papakura Joinery.
Director Glenn Haszard says his team had never executed a job of this scale before but he and project manager Jim Irvine knew they could "bite the bullet".
"We knew we could do it and we knew we'd have the skill to step up. We solve a lot of complicated problems in our everyday work – this was just going to be on a another scale."

The team started working on the prototype roof in December 2008. It worked out it needed to build 22 full pods, six half pods and 23 kauri columns measuring about 15 metres high and hired a temporary warehouse in Hunua Rd – increasing staff from 28 to 50.
But even after years of working on the project, the staff were still stunned when they saw the finished product installed, Mr Haszard says.
"They were just blown away. No one realised the scale of this project.
"For years we'd been looking at these individual puzzle pieces," he says.
"Seeing it fitted together brought on such an amazing feeling for all of us."

Cameron joins top of his trade

Joiner Cameron Wintle is up there with the best in the world in his trade. The 22-year old, who works at Papakura Joinery, returned recently from the World Skills competition in Shizuoka, Japan. There he put his skills and training to the test against 18 others in the joinery category. The competition is only open to tradespeople aged 22 or under. Cameron was the only New Zealander and finished seventh. As part of the competition he had to fashion a series of timber joints under tight time restrictions. The joints were assessed before and after they were fitted together to determine how accurate and well made they were.

Cameron says the time limits made it difficult. "The first one I did was a dovetail joint and I don't know how I actually finished. "He trained up to four days a week before he left for Japan. Some of his competitors were tough, he says. 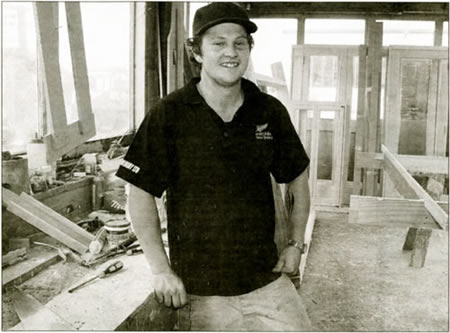 But he relished the chance to compete overseas."If any one ever had the chance to do it you'd be a fool not to."
The trip cost about $10,000 and Cameron says he is grateful to his sponsors for their support.
He is planning to head to the United Kingdom next year as part of his overseas experience.

Thank you for choosing Papakura Joinery to provide a quotation for your timber joinery requirements. We pride ourselves on excellent service and superb products. A team member from our estimating department will contact with you within 48 hours. Should you require an urgent answer to your request please contact the estimating department on 09 298 7145.
If you have not already done so, please ensure you have provided us with as much information as possible including the following: